Owners Corporation Managers of residential unit developments need to be aware of these changes as they apply to disputes between owners and building professionals such as builders and architects.

Presently an owner who is in dispute with their builder about defective work has two options:

However, in an effort to reduce the cost of access to justice for owners and builders alike, the Victorian Government has created Domestic Building Dispute Resolution Victoria (DBDRV) which will replace the BACV. It is expected to commence operation in July 2017.

“The creation of Domestic Building Dispute Resolution Victoria (DBDRV) means there will be significant changes in Victoria to the way domestic building disputes are to be resolved.”

What disputes will go to Domestic Building Dispute Resolution Victoria?

A ‘building owner’ includes any person who is the owner of the building or land on which the domestic building work was carried out. Accordingly, this definition will encompass owners corporations insofar as the dispute concerns common property.

Importantly, save for a couple of exceptions, any dispute which falls within DBDRV’s jurisdiction must be referred to DBDRV before an application can be made to VCAT. This differs from the conciliation service provided by BACV, which was optional. Accordingly, owners corporation managers should familiarise themselves with the DBDRV procedures.

In order to initiate the Domestic Building Dispute Resolution Victoria process, a party to the domestic building dispute must refer the matter to the chief dispute resolution officer (‘the Chief Officer’). The Chief Officer will determine whether it is suitable for conciliation. If the matter is to proceed to conciliation, the Chief Officer may appoint a building assessor, architect or other suitably qualified professional to inspect the building works, prepare a report and to assist during the conciliation process.

Interestingly, the DBDRV will only order a builder to pay for rectification to be carried out in circumstances where the building work ‘is so defective that it would not be appropriate to allow the builder to rectify or complete the work’. Should a party wish to appeal the DBDRV’s orders, they may apply to VCAT. However, if the DBDRV’s orders are affirmed, then VCAT may award costs against the appealing party.

If the DBDRV’s orders are not complied with, the aggrieved party may terminate the building contract and apply to VCAT for an order for payment of damages by way of compensation.

Is a Special Resolution required to refer a matter to DBDRV?

It is unclear whether the DBDRV process constitutes legal proceedings, the commencement of which requires a special resolution by owners corporations. The conciliation process is very different to how traditional legal proceedings are conducted, but the fact the DBDRV can make orders compelling the parties to do certain things creates some doubt around this question.

Hopefully, this issue will be clarified fairly soon after the commencement of DBDRV. Until then, it might be prudent to obtain a special resolution to avoid any difficulties down the track.

If you would like further advice on owners corporation matters, James can be contacted by email at JCollier@moray.com.au or by telephone 03 8687 7354. Moray Agnew https://www.moray.com.au/ 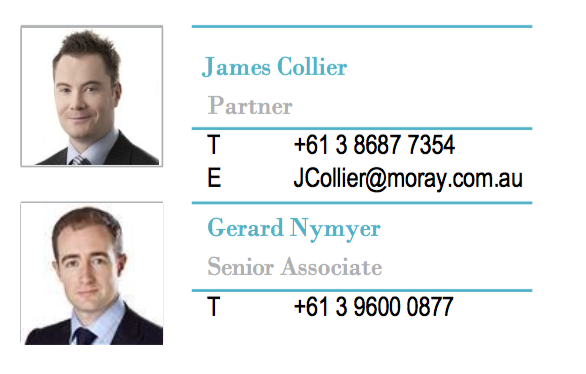 The content in this paper is intended only to provide a general overview. It is not intended to be comprehensive nor does it constitute investment nor legal advice. You should seek professional advice before acting or relying on any of the content.

5 Things to Look for in Your Next Property Investment

Four Principles of Corporate Finance that apply to Strata