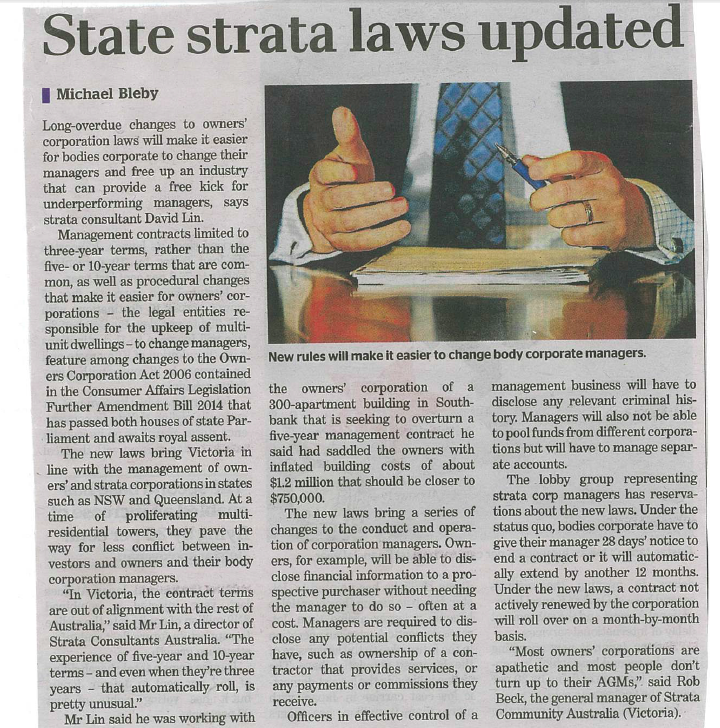 [originally published in The Age, The Sydney Morning Herald and The Brisbane Times 14-10-2014]

Management contracts limited to three-year terms, rather than the five- or ten-year terms that are common, as well as procedural changes that make it easier for owners’ corporations – the legal entities responsible for the upkeep of multi-unit dwellings – to change managers, feature among changes to the Owners Corporation Act 2006 contained in the Consumer Affairs Legislation

Further Amendment Bill 2014 that has passed both houses of state Parliament and awaits royal assent. The new laws bring Victoria in line with the management of owners’ and strata corporations in states such as NSW and Queensland. At a time of proliferating multi-residential towers, they pave the way for less conflict between investors and owners and their body corporation managers.

“In Victoria, the contract terms are out of alignment with the rest of Australia,” said Mr Lin, a director of Strata Management Consultants. “The experience of five-year and ten-year terms – and even when they’re three years – that automatically roll, is pretty unusual.”

Mr Lin said he was working with the owners’ corporation of a 300-apartment building in Southbank that is seeking to overturn a five-year management contract and had saddled the owners with inflated building costs of about $1.2million that should be closer to $750,000.

The new laws bring a series of changes to the conduct and operation of corporation managers. Owners, for example, will be able to disclose financial information to a prospective purchaser without needing the manager to do so – often at a cost. Managers are required to disclose any potential conflicts they have, such as ownership of a contractor that provides services, or any payments or commissions they receive.

Officers in effective control of a management business will have to disclose any relevant criminal history. Managers will also not be able to pool funds from different corporations but will have to manage separate accounts.

The lobby group representing strata corp managers has reservations about the new laws. Under the status quo, bodies corporate have to give their manager 28 days’ notice to end a contract or it will automatically extend by another 12 months. Under the new laws, a contract not actively renewed by the corporation will roll over on a month-by-month basis.
“Most owners’ corporations are apathetic and most people don’t turn up to their AGMs,” said Rob Beck, the general manager of Strata Community Australia (Victoria).

Is it Defamatory to Call Someone Unfinancial?

Posted October 15, 2014
Contributed by Michael Bleby the Age, the Sydney Morning Herald and the Brisbane Times